Procrastination… a Life Sentence to Productivity

Procrastination is a challenge we have all faced at one point or another. For as long as humans have been around, we have been struggling with delaying, avoiding, and procrastinating on some issue that matters to us.  Sometimes we wait because we just don’t care enough about the project, but other times, we care a lot…and still end up doing something else.

Do you have too much to do and too little time to do it?  Do you have tons of emails in your inbox? Are the family priorities adding up? If so, you’re not alone.  In today’s hectic, connected world, there is a 24/7 mindset which requires so much of you.  Too many demands on your time can lead to a “scarcity mindset” in which you are so busy running around taking care of the problem right in front of you that you neglect to take actions or make decisions that will help you in the long run.  The key is to take control of your time, rather than letting time control you.

It starts with prioritizing projects and making a choice between working now on a given task, working on a different task, or doing nothing at all. Research confirms that your decision to work on something is driven by how much value you assign to a specific project at that moment – what psychologists call its subjective value.  And procrastination, in psychological terms, is what happens when the perceived value of doing something else outweighs the value of working on a project now.

This way of thinking suggests a simple trick to defeat procrastination…find a way to boost the subjective value of getting a chosen project done now, relative to the value of other things on your plate.  That being said, consider increasing the value of the project, decreasing the intensity of the distraction, or some combination of the two.

You must understand that the human brain values immediate rewards more than future outcomes.  You are wise to appreciate that you cannot rely on long-term consequences and rewards to motivate your present self. You must gain discipline in moving future rewards into the present moment. Your future consequences must become present consequences.

Let’s use an example to support the concept. Let’s say that you have a major project. You have known about it for weeks and continued to put it off day after day. You have experienced a little bit of nagging pain and anxiety about the task, but not enough to motivate you to take immediate action.  Then, suddenly, the day before the deadline, the future consequences turn into present consequences, and you complete the project in the nick of time. The pain of procrastinating was so intense, you finally took action.

The problem is so timeless, in fact, that ancient philosophers like Socrates and Aristotle developed the word, Akrasia, to describe the state of acting against your better judgment. It is when you do one thing even though you know another project is more important.

Rory Vaden, co-founder of Southwestern Consulting and author of Procrastinate on Purpose, uses a term, “Priority Dilution” to describe this phenomenon.  Priority Dilution occurs when you delay today’s most important activities by consciously or unconsciously allowing your attention to shift to a less important task. Of interest, Priority Dilution has nothing to do with being lazy, apathetic, or disengaged.  And it affects top performers and chronic overachievers.  It is the reality that there is a tug of war inside your head to prioritize projects that offer instant gratification.

In the 1980s, author and time management expert Stephen Covey explained “Rocks, Pebbles, and Sand” with this story:  A philosophy professor stood before his class with glass jar and proceeded to fill it to the top with large rocks. He then asked his students if the jar was full.  The students agreed that it was.  The professor then took a box of pebbles and proceeded to roll them into the openings between the rocks.  He once again asked, “Class, is the jar full?”  The class nodded. The professor then picked up a bag of sand and poured it into the jar. The sand quickly filled the porous areas between the rocks and pebbles.  The jar was now full. 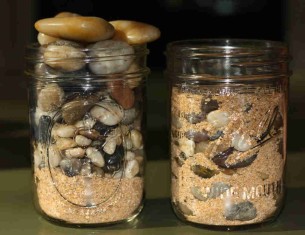 “Now,” said the professor, “I want you to recognize that this jar represents your life. The rocks are the most important things in your life – your spouse, partner, or children – things that if everything else was lost and only they remained, your life would be full.  The pebbles are other things that matter – like your friends, profession, home, and car.  The sand is everything else.  The small stuff.”

“If you put the sand into the jar first,” he continued, “There is no room for the pebbles or rocks.  The same goes for your life. If you spend your time on the small stuff, you will never have room for the things that are really important to you.  Pay attention to things that are critical to your happiness and future well-being. Take care of the rocks first – the things that really matter. Set your priorities. The rest is just sand.”

A Four-Step Checklist to Design Your Lin...

Assess for Success... a Requirement for ...